If it was true then I couldn’t do anything about it as I’m from France.

I have tried a few ATM here and no PIN services. All I can do is withdrawing cash.

I ran into the same problem in Austria, not possible to change PIN at the ATM although it’s a Mastercard Chip aware one which I looked up using the Mastercard ATM finder. There is no ‘PIN services’ menu in it, just withdrawal and charge up prepaid phone cards. Had a support chat with Revolut and they advised me to post it at the community section so I join this already existing thread.

It’s a fact that we can’t change the PIN at our ATMs. Our local card providers implemented PIN-Change that way that you tell them your new PIN and verify it afterwards with a normal withdrawal at an ATM where you are using your new PIN. After that withdrawal your personal PIN is set.

So it would be great if Revolut would allow us to change the PIN within the app. We could then also go to an ATM and verify the new PIN with a small withdrawal, no problem doing that. But at the moment it’s def. impossible to change it.

Here is the link already mentioned in this thread telling there are many other countries with this problem:

PIN change offers you the opportunity to choose your own PIN. This will make it easier for you to remember the PIN on your Businesscard or Corporate Card.

So hopefully Revolut will implement it in a future app update.

I’ve changed the PIN one year ago from the app, did a withdraw but the card is rejected by the merchants because of the wrong pin code (ATMs did not update the PIN), as I don’t remember the original PIN, I can only use it online and at ATM :(.

Don’t you have the possibility to change the PIN in the app ? Under the card section there is the show PIN section where you can also change it.

Hope that might work for you when there is no service for that at the ATM’s.

@C0ldwater it’s not working. Unable to do so.

Good idea, but unfortunately this doesn’t work. When you select “show pin” and then “change pin”, there is a popup telling you to go to a chip&pin enabled ATM and select pin services. So impossible for us to change pin.

In short: enter card details, enter new pin, visit an ATM an do a withdrawal. As already suggested in this thread.

Alright, Thank you for the explanation. I never tried to reset or change my PIN so I did not know about the popup.

Add Finland to the list… so here it is:

PIN Change is available on all ATM’s that accept MasterCard in some EU countries. With the exception of Belgium, Luxembourg, Austria, Germany, The Netherlands, Finland, and France.

That is how it used to be with Revolut as well. They changed that a while ago. Maybe because of too many customer complaints because of the complicated card update process where customers need to use the old PIN first at a card reader that updates the chip? Maybe this chip update process isn’t implemented in POS terminals in a way that it works reliably worldwide?

You can change PIN in Paris Chatelet - Money Change ATM near the fountain.
Its a foreign ATM and a changing PIN option is avalaible.

Actually you can change your Revolut PIN at the ATM in Austria.
At least it works with Erste Bank, BAWAG and PSA ATMs. I quite often change the PIN and never had a problem.

Revolut should add the pin change option in the app like most other banks do. After changing the pin in the app, one ATM transaction should update the pin on the chip.

That’s an interesting work-around to consider.

Does anyone of you know if it’s possible to change PIN in Italy, and if it is, in which bank atms?

I managed to change pin in The Netherlands using an ATM operated by Euronet Worldwide.

CharlesPC is refering to the Euronet Worldwide ATM that is on 9 Rue de Berger, 75001 Paris that is next to the ICE (International Currency Exchange) office. 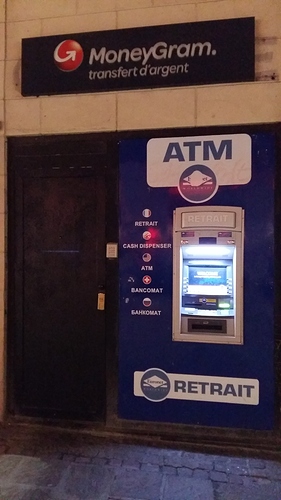 I can support as well that you can change your Revolut card PIN in this ATM, many thanks for the hint!

Not working on my local ATM (BPM)

I will try in next village, bigger bank and newer ATM, the report back