True @Dephibio @Nickand. When I (as others) asked on Twitter implementation for Pay, I meant for spending of course. For sure it will be a HUGE disappointment (already the case when I said it to followers)… but a step forward in a great direction.

However, the previous RevTeam’s answer said that they’ll be able to integrate Pay later. They HAVE to do that. For N26 customers it’s coming for sure ater this year… and we ALL wait for it coming to Revolut.

Yes it’s true that Apple ask a lot of money to run Pay. However Revolut raised some money to growth (and I think that’s part of the growth/improvement).

In fact, it can also be an option to pay every year for as an example. But yes, it shouldn’t penalize other users who don’t use the service.

Edit: Customer Support says: “It will be out soon. At the moment it is ready, but not fully released with Apple. It should be done early this week. Please stay tuned.” 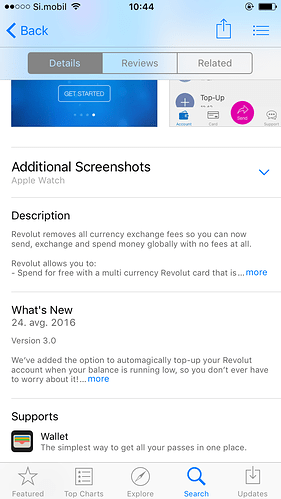 Absolutely, the covenience of having Apple Pay is awesome, but then it takes away the individuality of the fact that Revolut is not going to screw you over with random charges. All of the card transactions in the world pay a fee to Mastercard/Visa/Amex etc. for processing the transactions, and Apple just adds the extra ontop of that. As for the 1% boon nonsense, they really want me to pay from my bank account which is already in the apple wallet to top up their card which is also in my wallet ? Paying to move money from one pocket to the other is more than I am prepared to do.

This is a huge disappointment. People asking for Apple Pay want to be able to user their iPhones to make payments, not just topups. Especially with the current lack of contactless cards for existing customers it would allow them to make contactless payments anyway. And it will probably also mean a boom in Revolut usage by making payments using Revolut more attractive.

Apple Pay topups would also be disappointing to international customers since only customers in supported countries would be able to use this feature.

Hi all, we definitely want to add support for adding the Revolut card to Apple Pay wallet as soon as it is possible. The reason we haven’t done it yet is not a technical one, it’s the fact that we first have to become our own issuer. This is something we are actively working on, as we are all as keen as you guys are to add our Revolut cards to Apple Pay! We will keep you posted.

Thanks! So I guess we’ll see that more concretely when you will get you MasterCard Principle Issuing License on the next 6 months ; see yo there.

Hi @AlexDedalus - I just switched to Caisse d’Epargne for Pay

It is a merchant who pays 0.15% fee for using ApplePay so should not be a problem to pay for things using the Revolut card via ApplePay. Where I see the problem is for top-ups as the Revolut top-up is assigned 6012 merchant category code (which is normally used for financial services like repayment of mortgage or buying casino chips online) by most banks which may or may not attract a 0.15% ApplePay fee depending on the issuing bank’s policy but please correct me if you think I’m wrong here

@Ratamon That is not accurate. The card issuer (in this case Revolut) would pay that fee. From Wikipedia

Financial Times reported that Apple receives 0.15% cut of US purchases made with the service,[8] but, following the UK launch, reported that Apple’s cut is much lower in the UK. This is largely because Regulation (EU) 2015/751 capped interchange fees in the European Economic Area at 0.3% for personal credit cards and 0.2% for personal debit cards with effect from June 8, 2015.[9][10]

Apple Pay is a mobile payment and digital wallet service by Apple Inc. that allows users to make payments in person, in iOS apps, and on the web. It is supported on the iPhone, Apple Watch, iPad, and Mac. It digitizes and can replace a credit or debit card chip and PIN transaction at a contactless-capable point-of-sale terminal. Apple Pay does not require Apple Pay-specific contactless payment terminals; it works with any merchant that accepts contactless payments. It is similar to contactless...

@robert.dolca Having done some digging, you appear to be right. My blatant credit card analogy did not work here. Probably, forcing merchants to invest in the new NFC enabled terminals is sufficient to put off many smaller ones at the moment. Making them pay 0.15% extra would be over the top.

So the cost for Revolut arises when the customers pay through ApplePay. As they currently charge 1% for the credit card top-ups, it could be fair if they charged the 0.15% (or whatever the actual cost is) for using ApplePay to make purchases. No one is likely to complain too much

I’m confused. I don’t think, Apple is adding something. The fees for merchants are fixed. But the banks, the card issuers, have to give Apple a share of the fees they get from every transaction.

So I see it’s not that appealing for Revolut to implement Apple Pay for payments, because their business model relies so much on these fees they earn with every payment one makes with their card. But as Edward says, they will do it as soon as they become a card issuer.

I think people should be aware that banking services do cost something.

On the other hand: Apple pay is appealing to banks, because it reduces the risk for credit card fraud. That alone might make it worth for banks. And it has some other benefits: usually, contactless payments are limited. With Apple pay, merchants can choose to allow higher payments, because its more secure, more comparable to chip + PIN than to just waving a card.

For sure that’s the business model of a little of free banks out there!

A lot of these are implementing Pay for Spending ; I’m curious to know if the contract is not a little different with Free banks VS Paid Big Banks.

Also, Revolut raised some money trough investing ventures and 1M by us, the customers. So that can be used for Pay to serve the customers with something they want (also Android Pay to cover everyone) and as you said it to protect Revolut from fraudulent transactions.

PS: I really love Pay and I use it everywhere contactless payment is available (90% of the places I normally use my card in France). I often go out without my credit card so nobody can steal the numbers in my backpack or sniff the contactless chip ont the card itself ; and I continue paying with ease with my iPhone! I know it’s secure, I’m secure and my money is safe.

@julien any business has to make money. Revolut cannot just squander money to support customers on a permanent basis. If we were to enjoy the Revolut services in the forseeable future, they would need to make money somehow. However, if there is still some profit from the merchant fee left after paying Mastercard, Apple, CurrencyCloud, Optimal Payments, they can do it without passing the cost on to us.

Yes sure, the fee taken to the merchants is pretty big. In fact it’s around 1.30% for a Chip & PIN payment with a MasterCard Prepaid in the UK (domestic card). But all depends ont he method, type of card etc…

I think Revolut already made the maths and is already planing to add it!

As far as I know Revolut (or any other card issuer) does not earn anything when people use their card. The commission from the merchants goes to the POS owner (bank) and then they pay part of it to VISA/Mastercard. Please correct me if I am wrong.